review: honey bee bakery (with apologies to all my non-local readers. you might want to look away.) 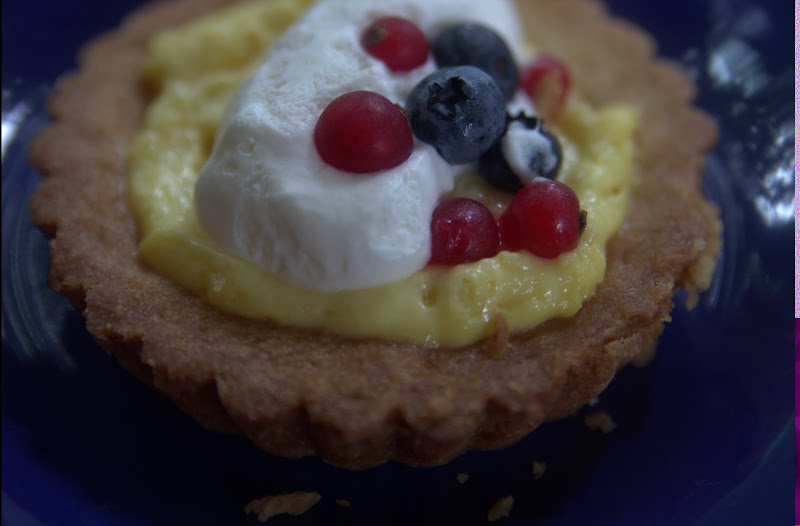 a few weeks ago, a friend introduced me to the honey bee bakery (actually, i think she introduced me to “bea’s bonnet snack shop” but they’re basically the same thing–follow the link for more info).  i’d bought items from their farmer’s market stand unknowingly, but always fairly straightforward things like … bread.  but when i went into the “snack shop” (which is a very cute wee tiny thing with one table below a curtained window and a pitcher with fresh flowers and some baker’s racks with tempting displays of fresh baked goodness and a very tiny order window in one wall where you place your order or pay for the baked goods you’ve chosen and there was barely enough room for my friend and me and my very active toddler.  granted, the toddler seemed to take up the most space, so maybe it’s all in my head?) i was struck by a sudden and urgent need to try one of the sweets offered there. 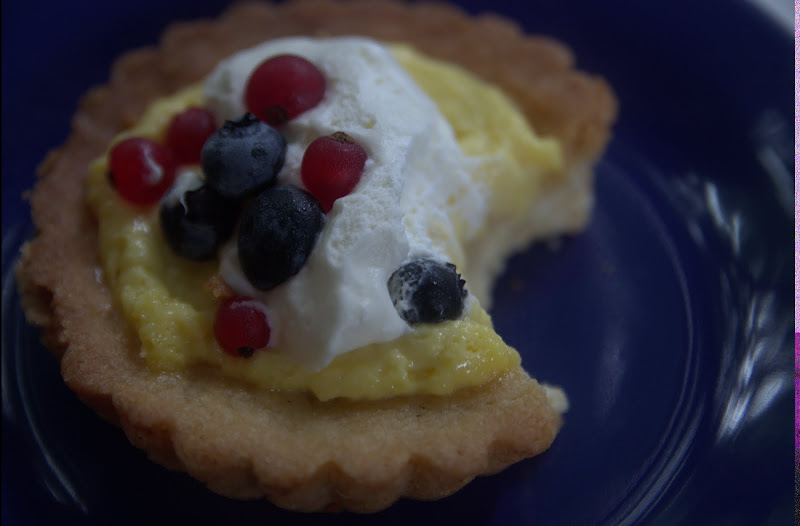 no, it wasn’t the tart pictured above (i’ll get to that in a minute).  the first thing i tried there was the lemon sandwich cookie.  picture two of the softest sugar cookies you can imagine.  nope, softer than that.  so soft that i’m not sure how they spread that wonderful layer of lemon curd on the bottom of one of the cookies without it just melting to pieces.  now also picture that cookie lightly dusted with powdered sugar and paired with another cookie and sandwiching some deliciously tart-sweet lemon curd.  oh, and i’m fairly certain the cookies had some lemon in their recipe as well.  let’s just say it’s a good thing it comes packaged in a bag because otherwise i wouldn’t have been able to hold on to it.  as it was, i couldn’t hold on to it long anyway because i was compelled to inhale in into my body as quickly as i could because it was that good.  ergo, no photos.  sorry. 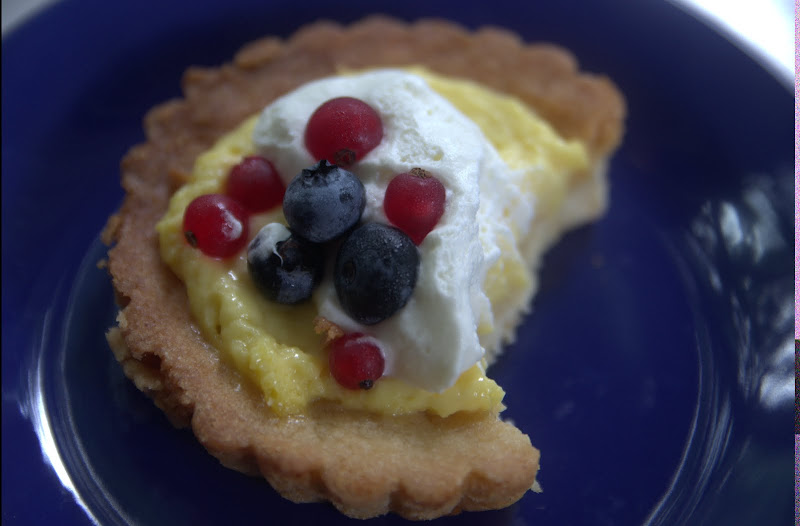 then, this past tuesday i visited the eastside farmer’s market for the first time and, lo and behold, honey bee bakery has a tent at that market!  although there was a lemon sandwich cookie waiting for some lucky person to take it home, i decided i had to try the other sweet treat that had tempted me the same day i bought the cookie–a lemon curd tartlet with fresh berries.  (and no, it’s still not the one photographed above, but i’ll get to that.)  i had some trepidations about this tart because i’d been disappointed by tarts in the past.  specifically–i’d bought a “tarte au citron” from a very authentically french restaurant here in town whose food i adore and although the “citron” part was deliciously tangy, the “tarte” part was so hard to bite into that it more or less ruined my tart-eating experience.  and since that restaurant is usually so delicious and since it is so authentic, i assumed that instead of the tarte being wrong, it must be me that was mistaken and this is how tartes are supposed to taste.  and crunch.  and so, i could see that this tart also had a pretty thick crust and i worried that i’d end up gnawing at it or that the lemon curd would be mostly fluff and sugar and taste like frosting or mousse, but i am a total sucker for lemony things and lemony things with fresh berries call my name even louder and so i decided to give it a chance. 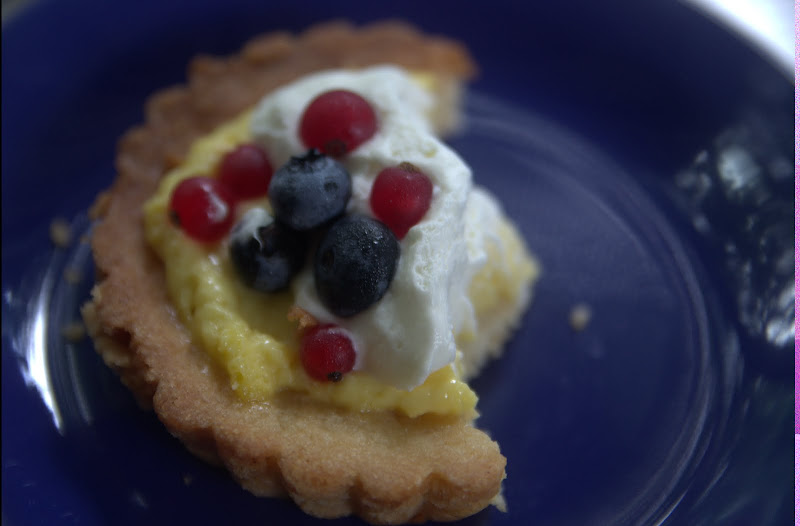 i am so glad i did.  this was possibly the best lemon tart i’ve eaten in my life.  the crust was soft, but also chewy (not falling apart like the sandwich cookie).  it was a perfect calm (but never boring) canvas to let the lemon curd and berries to really shine.  the lemon curd cream was a dreamy cloud of tart-sweet-tangy-lemony goodness that just melted on my tongue.  the berries were exactly the right compliment, adding an extra burst of fresh flavor.  again, i inhaled the entire thing before i could even consider photographing it.  and so, the one pictured here in this post is actually the second tart.  the one i bought today (at the westside market).  it’s slightly different than the first one (there’s that separate layer of whipped cream instead of the cream and lemon curd being mixed together and the berry variety is slightly different) but the essence of melt-in-your-mouth lemony wonder and the delightfully soft give and yet firm chewiness of the tart is the same and i just had to share it with you.  the only problem?  i’m apparently terrible at sharing. 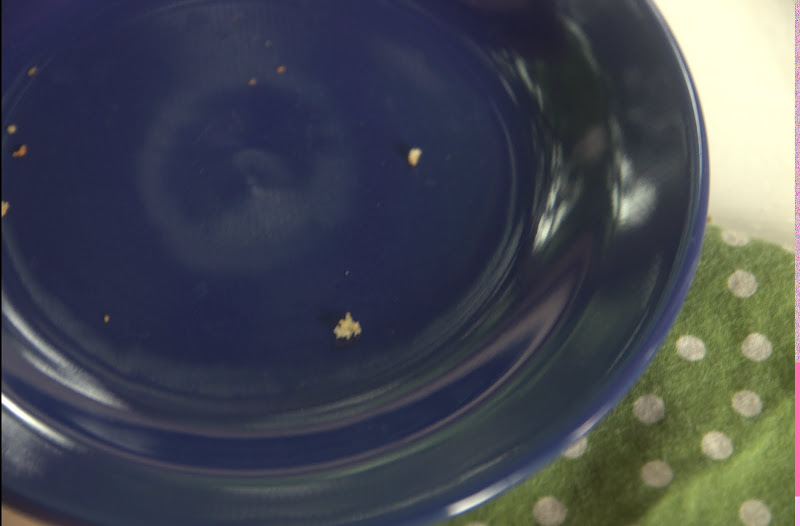 go get your own.  get two if you have someone else who’ll ask you for a bite.

This entry was posted in reviews, yum. Bookmark the permalink.

2 Responses to review: honey bee bakery (with apologies to all my non-local readers. you might want to look away.)