last weekend, a friend told me about an event that i had to attend.Â  apparently, this is the fifth “iron cupcake” competition in town, but it’s the first one i’ve been to–where have i been?Â  although i must admit that the theme for this one was tailor-made for me.Â  let me back up.Â  “iron cupcake” is a cupcake making competition where the contestants are challenged to use a specific ingredient and then the public comes in, pays a few bucks, gets to try the cupcakes and vote for their favorites.Â  this month’s “ingredient” was that the cupcakes had to relate to a children’s book theme. (swoon!)Â  i happily forked over the $7 cash and then gathered this plate of beauties: 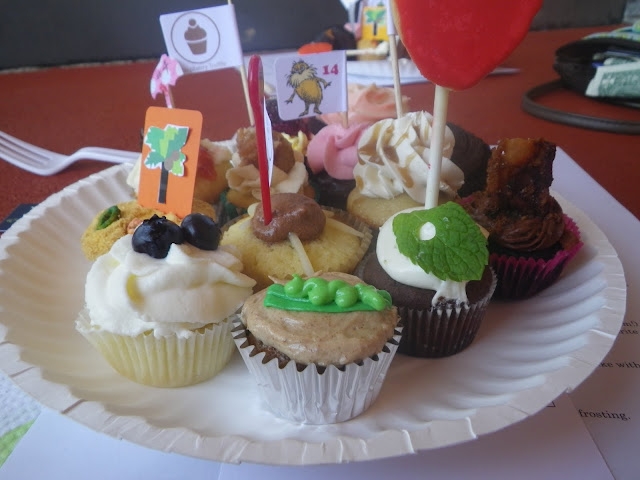 of the books represented, there were only three chapter books (harry potter, charlie & the chocolate factory and alice in wonderland) and amazingly, only one repeat picture book (two “cloudy with a chance of meatballs” entries).Â  there were two cupcakes with bacon (based on the three little pigs and if you give a pig a pancake) and a lot of frosting.Â  in retrospect, i maybe should have eaten more than just banana bread, a banana, and a few slices of cheese for breakfast before diving into these beauties.Â  i’ve never had a sugar high quite like this one.Â  it may have been intensified by the poor sleep i’d gotten the night before, but i actually began to feel dizzy after about 9 cupcakes.Â  but check out those details!Â  i love the hole punched in the mint leaf for the very hungry caterpillar! 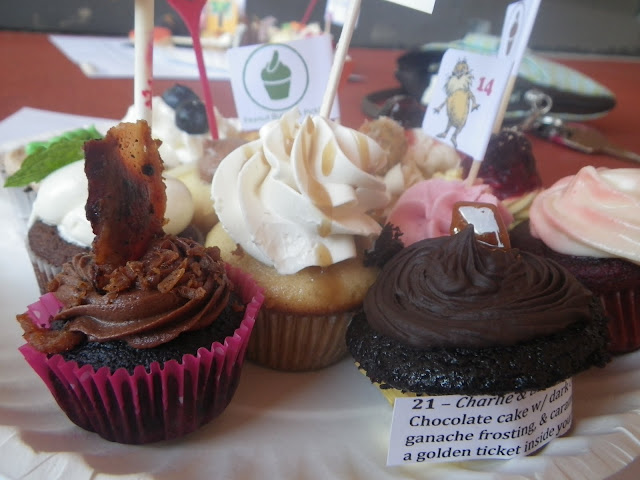 there were also prizes awarded for table decorations and costumes (there were some seriously competitive people participating in this!)Â  you can see more photos here.Â  notes for next time:Â  bring an egg carton to carry all the cupcakes in.Â  if you don’t love it, don’t eat the whole thing!Â  eat a hearty (not sugary) breakfast before you go.Â  don’t forget to mark your calendar and go.Â  this is such a very fun event!Â  i wonder if i could host something similar with the teens at my library….

This entry was posted in fun stuff, library stuff, yum. Bookmark the permalink.