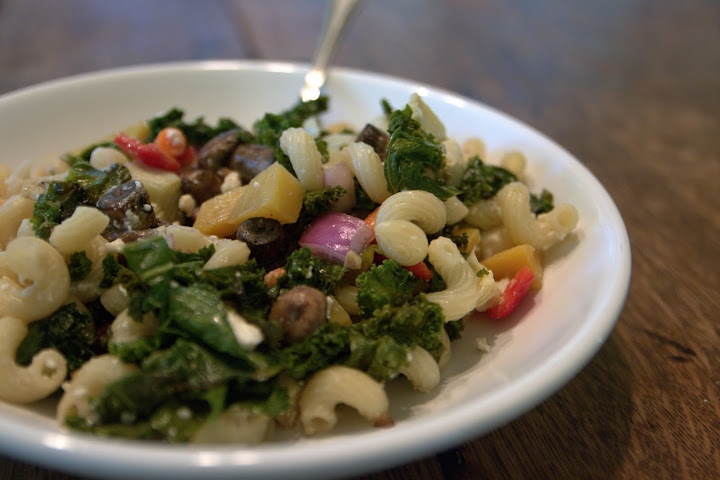 somehow today i managed to take two photos for this blog and somehow i’ve managed to sit down at the computer to blog them.  woo hoo!  okay, this first photo was my lunch today.  when i was young, my sister and i would sometimes make a sandwich out of whatever was in the fridge between two slices of bread and call it “alien casserole.”  not sure why it wasn’t “alien sandwich” (perhaps because “whatever was in the fridge” was often a casserole?) but there you have it.  today i made alien pasta salad.  or, let’s make it a little more grown-up and alliterative and call it “pantry pasta” even though i got most of the ingredients from the fridge.  it turned out so pretty and so (surprisingly) yummy that i thought i’d record it here for posterity.  stuff that was in my fridge today that went into this pasta:

homemade pickled golden beets, red pepper, red onion, kalamata olives, artichokes, some kale sauteed in bacon grease that was leftover from when we made this the other night, some mushrooms that were nearing the end of their days that i washed and then sauteed with olive oil and some garlic, the most awesome feta cheese from our local farmer’s market (this might have been the thing that made the pasta so incredibly yummy), and some fresh lemon juice

stuff that was in my pantry/spice drawer that went into this pasta:

i am thrilled that i’ve got leftovers for tomorrow’s lunch.  maybe i’ll even find some nice crusty bread to eat with it. 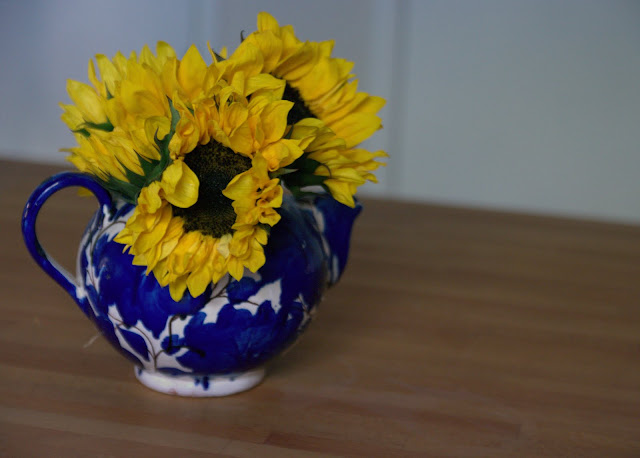 today’s second photo also comes with a complimentary side of “trip down memory lane.”  when i was in high school, i prided myself on extreme thriftiness.  i shopped at yard sales whenever i found one and haunted thrift stores frequently (okay, the thrift store thing hasn’t really stopped, but i’ve sort of given up on most yard sales).  one of my favorite yard sale stories was at a community yard sale being held on my high school’s grounds one weekend.  i stopped by near closing time and ended up making a pretty nice haul including several pieces of a tea set from mexico (which we later found out had lead in the glaze so i got rid of everything except the teapot) and four straight-back chairs with no seats and i think i spent less than $5 for all of that plus probably some other random junk i’ve forgotten about by now.  anyway, this teapot doesn’t get used nearly enough, but today when i bought a cheapy bouquet of sunflowers from trader joe’s i knew they just had to go in this teapot.  i even had a flower frog to put in the bottom to make the extra-wide mouth work out okay.  i love having these cheerful colors on my kitchen island.  it’s incentive to keep it cleared off (or at least tidy) for a few days, hooray!

and, because i still don’t have pictures of the clothes that i made for the clothing challenge (they’re [mostly] done, i swear!), i’ll just leave you with a picture of the cutest baby in the world: 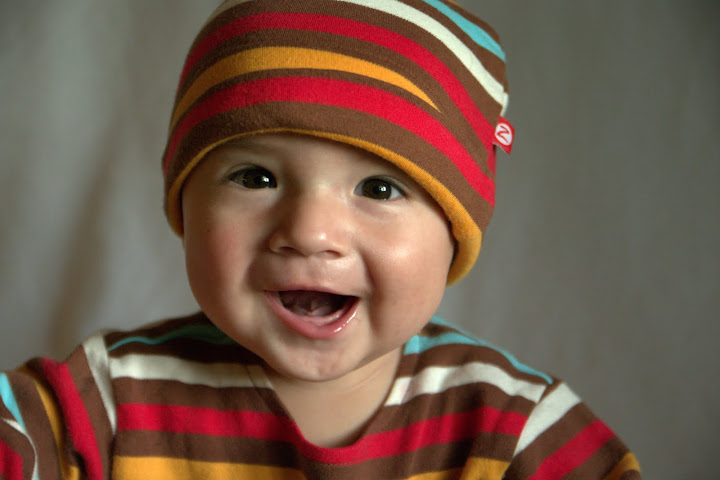 This entry was posted in autumn, baby stuff, trip down memory lane, yum. Bookmark the permalink.