a note from a friend and a two concert weekend 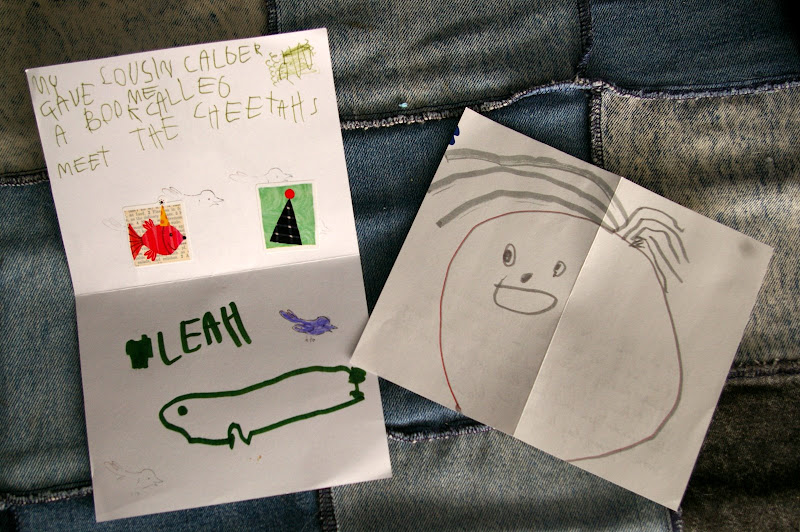 yesterday, as i was recovering from a possible migraine (nausea, headache, bleh) mr. happy stuff brought in the mail and told me that i’d gotten a letter.  i opened it and it was a note from a small friend of mine in minnesota.  apparently, according to her mom’s accompanying note, she had gotten some new stickers and decided she wanted to write me a letter.  in her own handwriting, she says, “my cousin calder gave me a book called ‘meet the cheetahs.'”  she loooooooooves cheetahs and i’m a librarian, so this is very important information for her to share with me.  :)  it made me smile and was the perfect antidote to my rotten headache.  what a lovely letter!

now for the concerts:

we attended two very different musical concerts this weekend.  the first one featured jonathan coulton* and the opening band was paul and storm**.  both were very silly bands (reminiscent of tmbg, early barenaked ladies and moxy fruvous) and it was a hilarious show.  probably the most surreal part of the concert for me was the audience.  composed almost entirely of computer geeks (my own dear husband included) and people dressed in … very interesting clothing… i think the most bizarre part was that neither one of us recognized anyone in the audience (a rarity in this town and at that venue), and yet we didn’t feel particularly out of place there.  i mean, i actually got most of the musical references and jokes–even the obscure ones were usually about bands that i actually knew pretty well.  hmmm….. they may have to go on the list of “concerts we have to go see if they’re ever in town.”
the second concert was the next night and was at our church.  it was a choir concert by the college choir of our alma mater.  having sung in that choir for years, it was interesting to be on the other side of the equation–listening to the group, not being intimately familiar with the music that they were doing, not being in the midst of the group and breathing all of the music day in, day out.  it was a lovely concert with some very nice musical moments (although our church is apparently not particularly acoustically friendly), but i wished that i was in the group and singing with them.  actually, i think my favorite song was the “thank you” song that they sang to those of us who’d organized their dinner.  singing a “thank you” song is a college tradition, but the song changes from year to year, so this was a song i wasn’t familiar with, but i loved it and now i kind of wish i had the music for it…. that could probably be arranged.
this weekend i also enjoyed tea and a wonderful, encouraging conversation with a friend who was traveling with the choir, and a visit from another long-lost college friend who came into town to interview for a possible job.  it was very fun to catch up with people i haven’t spoken with in ages and realize that we can just pick up the conversation, wherever we are in life, and it’s as though no time has passed at all.

*my favorite songs were probably the ikea song and millionaire girlfriend–both of which you can listen to here.

**they were rather bawdy, but hilarious.  fantastic banter with the audience (including prizes for people who caught their particular attention–the prizes were snack foods with “suggestive names” that they’d picked up at a convenience shop–like a pickle with the brand name “hot mama”).  let’s see…. i’ll recommend their celebrity singer impersonations at the end of the 1st gumbo pants album.

This entry was posted in la la la!, stuff that makes me smile. Bookmark the permalink.