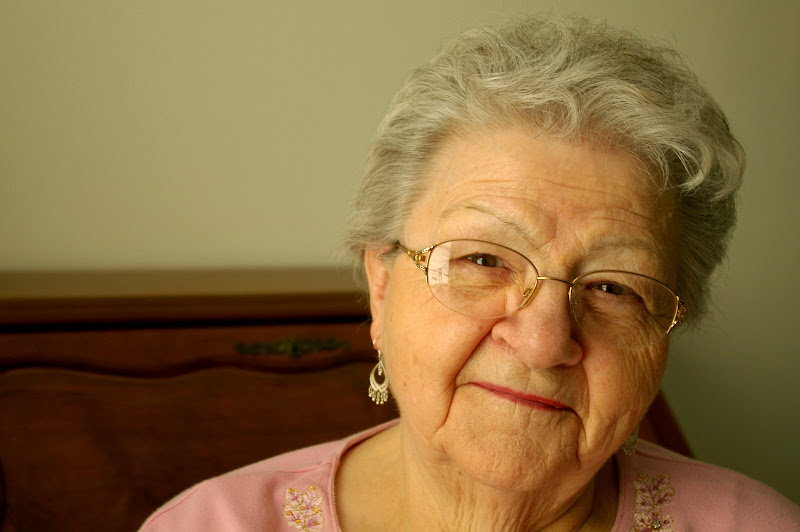 over christmas break, i was lucky enough to get to spend half a day with my grandma on the way home.  she used to live all the way on the other side of the country, but she recently moved and is now a short, five-hour drive away.  while i was there, i asked if she’d show me how to make english muffins.  i have a strong memory of her making home-made english muffins for us when i was in high school and realizing that i don’t hate english muffins–i just hate old, stale, sour-tasting, dry-as-a-bone english muffins.  home-made ones are a totally different story.  so get down your flour and butter, roll up your sleeves, put on an apron and join us for a baking tutorial!

first, you melt some butter in a pan with some milk: 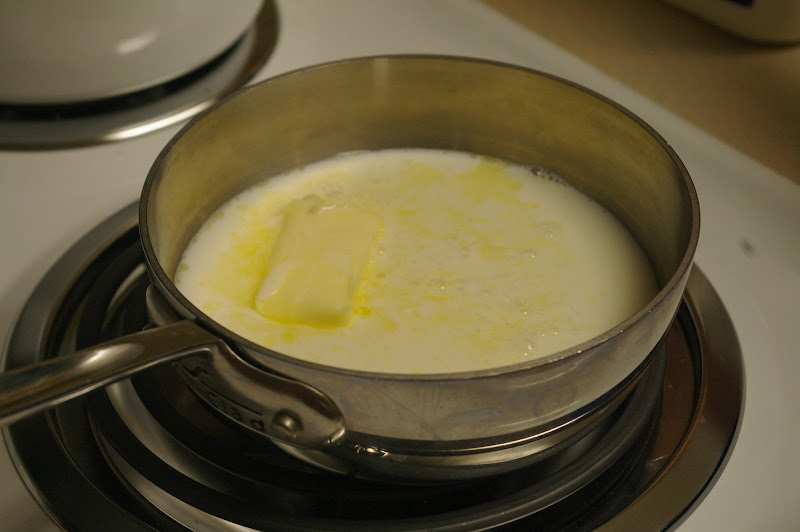 then, combine flour, yeast flour and sugar in a bowl: 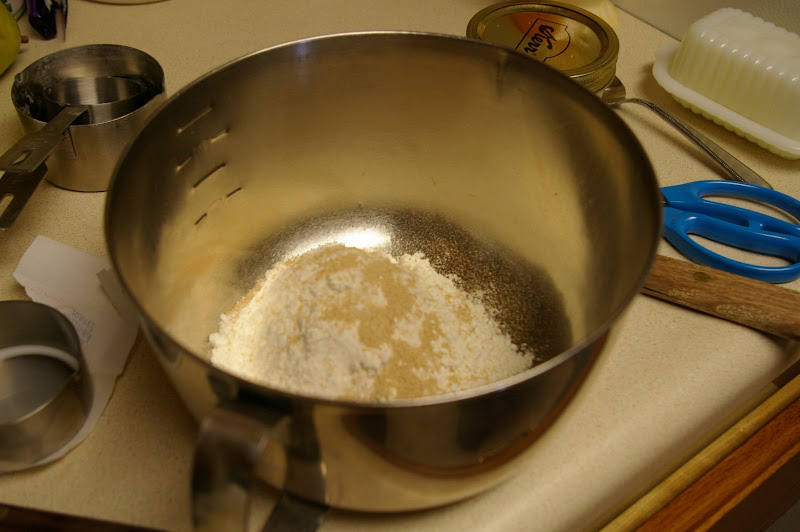 my grandma has turbinado sugar.  isn’t it pretty?  i have this memory of her house from when i was very little and she had raw sugar (it looked so strange and big and brown!) and i think flour that were kept in drawers (as in, a whole drawer full of sugar) instead of in the bag or in plastic tupperware containers.  (mom?  dad?  am i totally making that memory up?)  anyway, i still associate raw sugar with my grandma because her house was the first place i ever saw it. 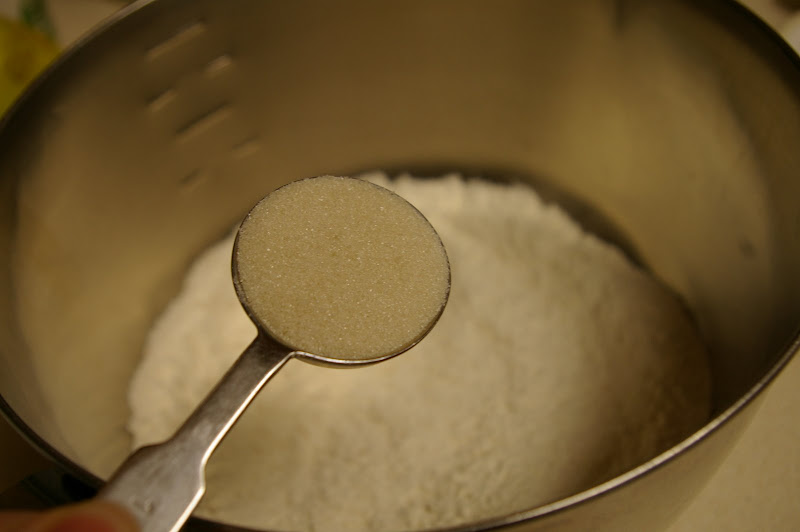 pour the milk/butter mixture into the dry ingredients, along with an egg until well-mixed: 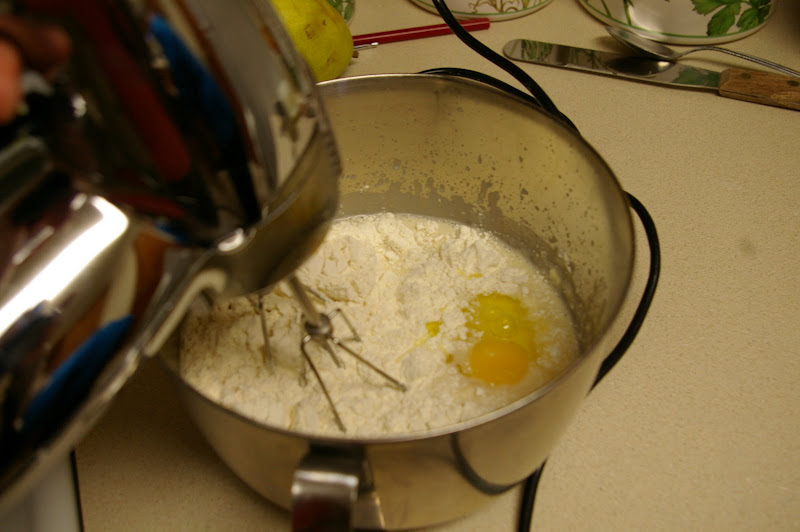 then add more flour until you get a stiff dough.  well, our dough was actually not so stiff and was pretty sticky, but it worked out okay in the end. 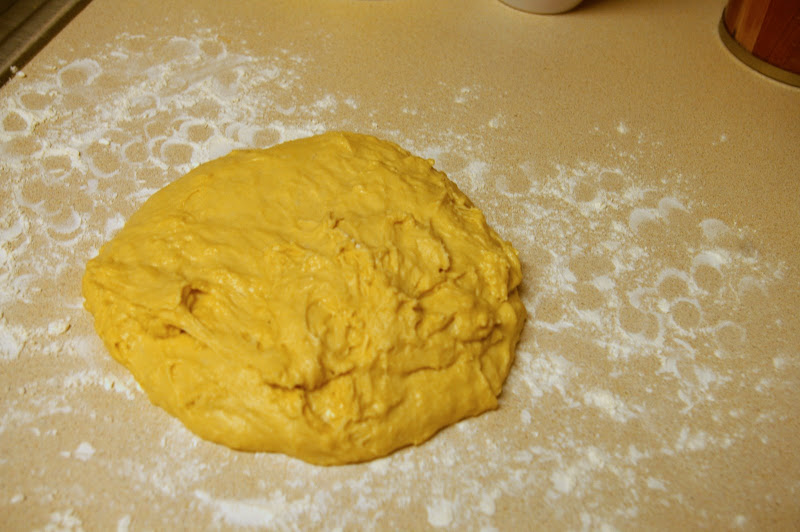 let rise in a warm place until doubled.  (i love this blue and white towel–it always reminds me of grandma’s house too) 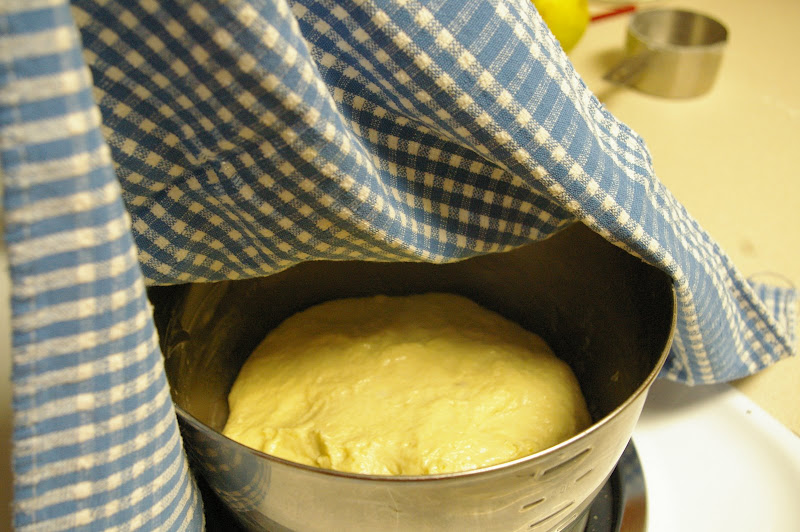 when you think it’s risen enough, poke it with your finger.  if the indentation stays, then it’s ready. 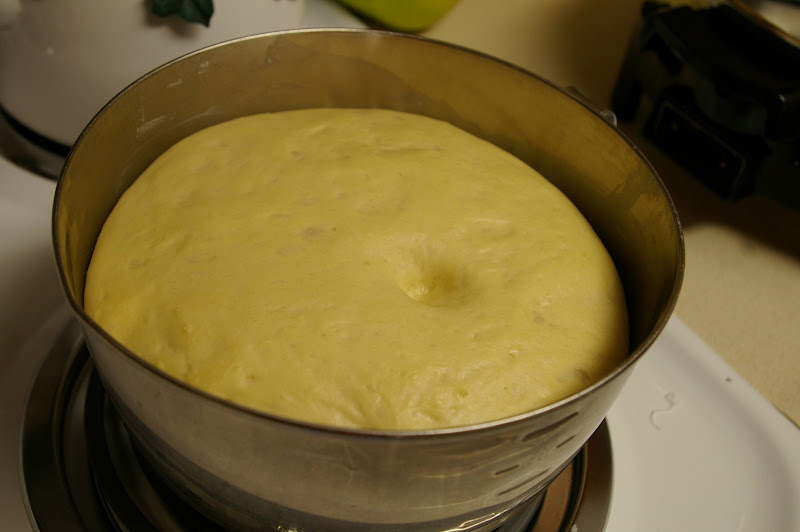 turn it onto a lightly floured surface and cut the dough into circles.  i forgot to take a picture of my favorite part–cutting out the circles!  i love to cut dough with biscuit cutters.  in fact, i avoid “drop biscuit” recipes because i know i won’t get a chance to press the cutter into that soft dough and try to squeeze as many circles out of the first rolling as i can.  anyway, sprinkle some cornmeal into a pan (or onto the counter or whatever) for the next step: 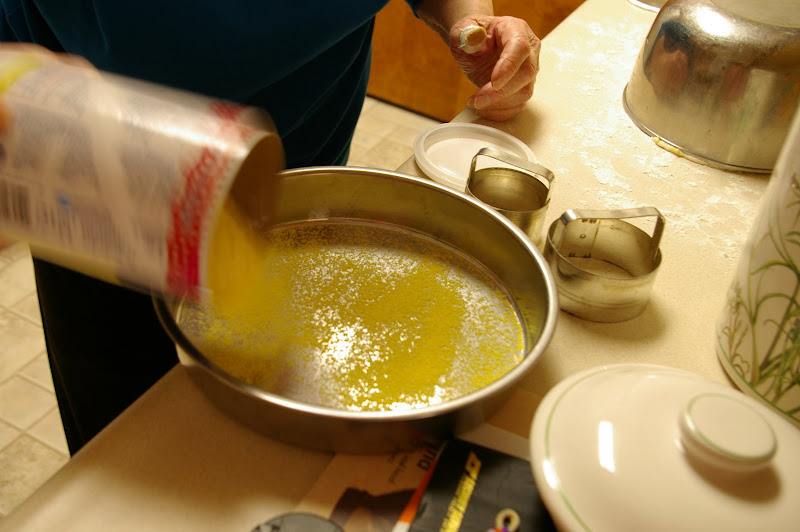 drop each muffin into the cornmeal so that a little gets adhered to each side. 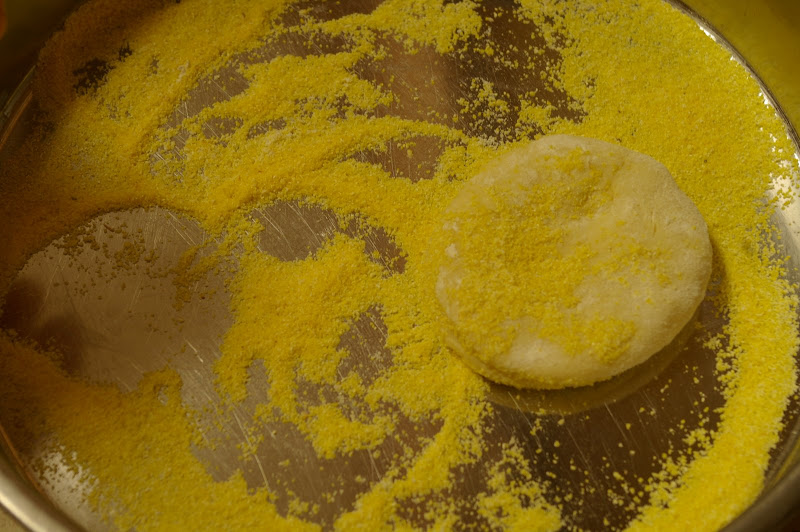 then, place them on a baking sheet (covered in parchment) to rise.  leave plenty of room between muffins as they will grow a bit! 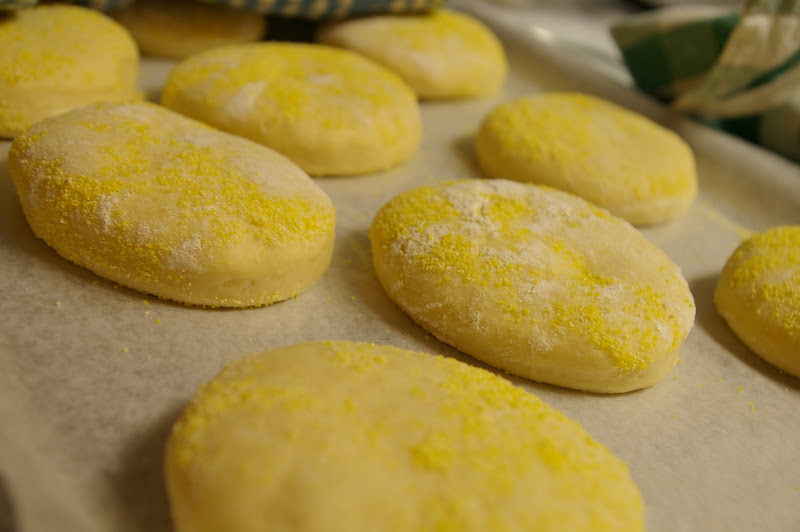 once the muffins have risen sufficiently, heat your skillet.  we used an electric skillet, but any flat cooking surface will do.  cook the muffins for about 8 minutes, then flip. 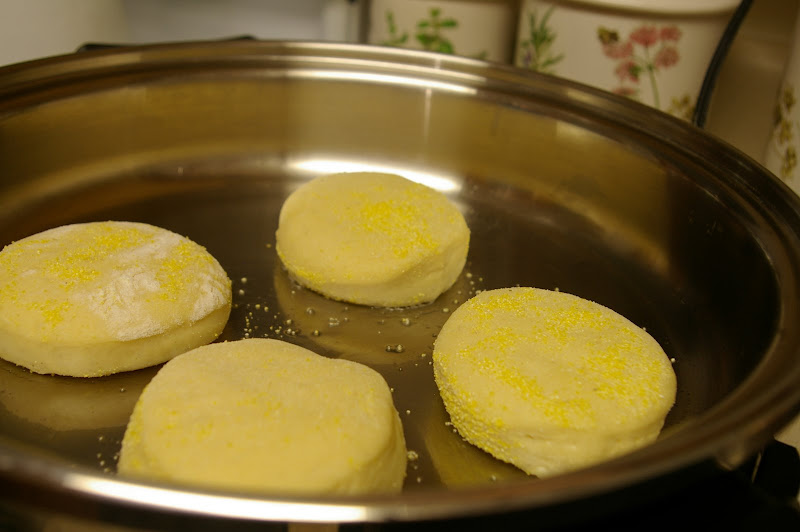 check it out!  they look like real english muffins!  (only much, much better…) 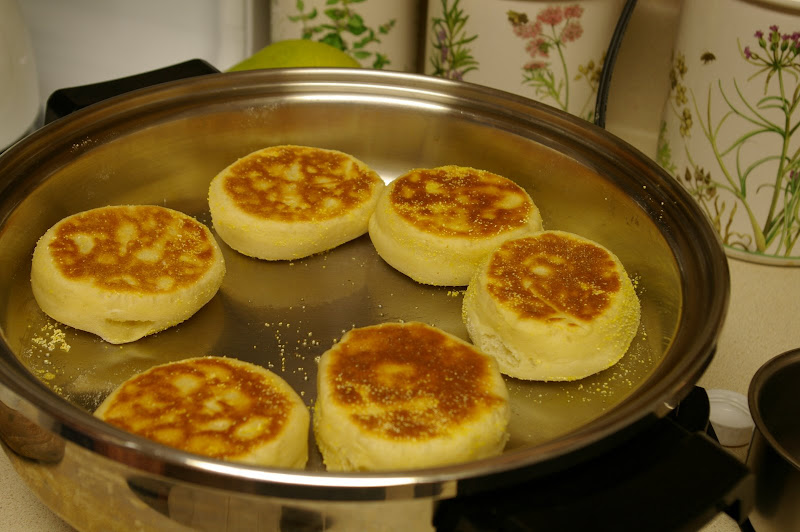 grandma says she normally substitutes a little whole wheat flour for some of the white flour, but we just forgot to do that with this batch.  also, the recipe instructs you to put some oil on your cooking surface, but i didn’t re-oil the surface after the first time and they still turned out fine.  the cornmeal helps to keep them from sticking.  these would be fantastic with cream cheese, peanut butter, lemon curd, honey, jam, tuna melts…. you name it, my mouth is watering just thinking about them.  here’s the recipe in brief (from the more with less cookbook)

heat in a saucepan until very warm (130 degrees):

in a large mixer bowl, combine:

with mixer at low speed, gradually beat liquid into dry ingredients.  increase speed and beat 2 minutes or beat vigorously by hand.  next, beat in:

turn dough onto lightly floured surface and knead just until well-mixed, about 2 minutes.  shape dough into a ball and place in a greased large bowl, turning once to coat dough with oil.  cover.  let rise in a warm place until doubled (about 1.5 hours).

punch down.  turn onto lightly floured surface, cover with bowl 15 minutes and let dough rest.  meanwhile, sprinkle cornmeal in a pie plate.  roll dough about 3/8″ thick.  cut dough into 3″ circles & re-roll scraps to make 18 muffins.  dip both sides of each circle in cornmeal; place circles on cookie sheets.  cover and let rise in a warm place until doubled—about 45 minutes.  brush large skillet with oil and heat.  when medium hot, put in 6 muffins.  cook 8 minutes on each side, or until brown.  repeat until all are cooked.  to serve, split muffins horizontally with tines of fork and toast.

thanks, grandma!  next time, maybe we can make your cinnamon rolls? 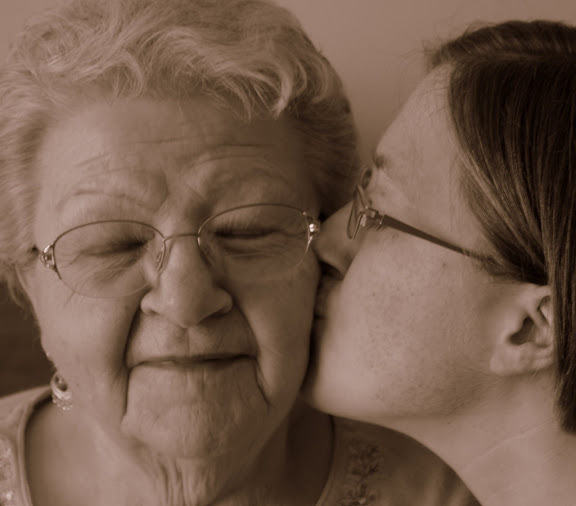 This entry was posted in trip down memory lane, tutorials, yum. Bookmark the permalink.

8 Responses to english muffins with my grandma–a photo tutorial