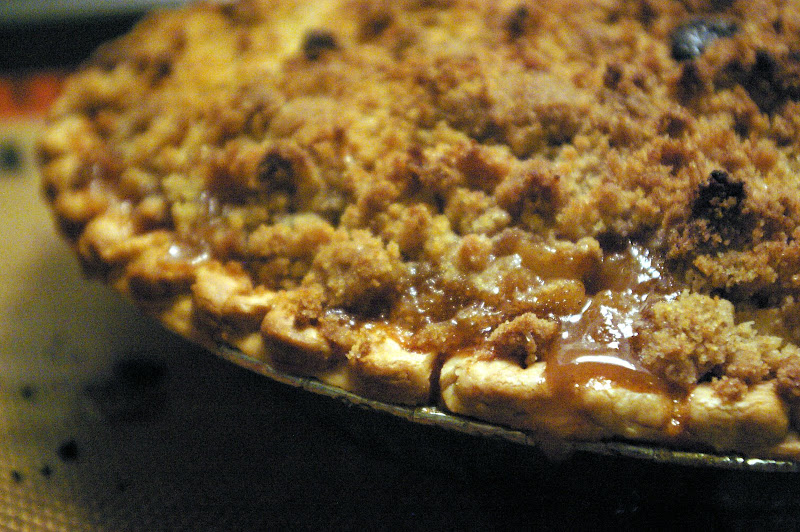 mr. happy stuff loves apple pie.Â  it’s not my favorite kind of pie, and i’m generally not so crazy about crumble toppings on things (so messy!Â  so dry!) so you know it’s got to be love when i decided to bake my man a dutch apple pie this past week.Â  i had a frozen crust that i wanted to use up, so i was hoping to find some recipe that would be really fast and easy and tasty.Â  i checked my favorite recipe source and the first recipe i read was this one.Â  i was drooling by about halfway through the recipe.Â  (and remember, i don’t even really love apple pie!)Â  but it looked too complex.Â  i mean, pre-cooking half the apples?Â  cooking down a syrup until it’s thick?

but of course, after i’d read that recipe, all others paled in comparison.Â  the first pie had sounded so luscious.Â  it had chinese five spice!Â  and brandy!Â  and actually,come to think of it, the cooked apples seemed like a pretty good idea!

so i finally decided that since i hardly ever make this pie, i should really do it right this time.Â  and since it was all about the love i have for my husband, why take shortcuts, right?Â  well, with a pre-made crust, the pie didn’t actually take all that long to make (although how anyone could fit that amount of crumble on top of one pie, i’ll never know.Â  i used about half.) and look at that bubbly goodness up there.Â  even i had to admit that with a scoop of vanilla ice cream, this pie is pretty good.Â  and i haven’t seen mr. happy stuff so, well, happy about any particular food for quite some time.Â  he came home from a frisbee game about halfway through the assembly process and sniffed the air and said, “is that pie?”Â  and when he came into the kitchen, he asked giddily, “is that… apple pie?”Â  at least he was nice enough to share a few pieces with me.

This entry was posted in autumn, yum. Bookmark the permalink.