celebrate the boy… with help from grandpa

my parents came for a visit a few weekends ago.Â  my dad is a wonderful woodworker and i’m always looking for projects that we can build together whenever they visit so that i can build my own woodworking skills.Â  i’d love to be as proficient in wood as i am in fabric!Â  this time, i asked if we could build a “fun pod” and he agreed that it looked very do-able.Â  unfortunately, when the time came to build it, i had other pressing obligations and since i can not be in more than one place at the same time and since i really wanted to have a “fun pod” i just asked dad to build it on his own.Â  it took about $50 worth of materials and only a short amount of time (not sure exactly, but i think it was just a few hours at most) to create this: 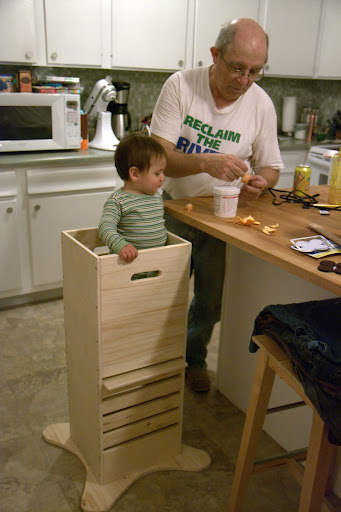 isn’t it great?!Â  i’m hoping to get around to painting it sometime, but it works just fine as-is.Â  the idea is that it’s safer than letting baby dude stand on a chair or a stepstool (less likely to tip or fold up on him, he can’t crawl down (or up) by himself… which i may regret later but for now is priceless) but still puts him at counter-top height so he can see what’s going on.Â  for the most part, he seems to like it and is content to stand there instead of insisting that i hold him in my arms while trying to chop onions or stir boiling liquids.

there are lots of similar products available online (learning tower, kitchen helper) and several online tutorials for how to build your own (ohdeedoh, another one on ohdeedoh, too lazy to find others), but i love that this one has a footprint not much larger than a barstool and i just love the simplicity of the design.Â  it’s definitely inspired by the funpod, but my dad made a few design tweaks to make it easier to build.Â  the adjustable floor is just a board that is notched on each end and then sits on slots cut into opposite sides of the fun tower: 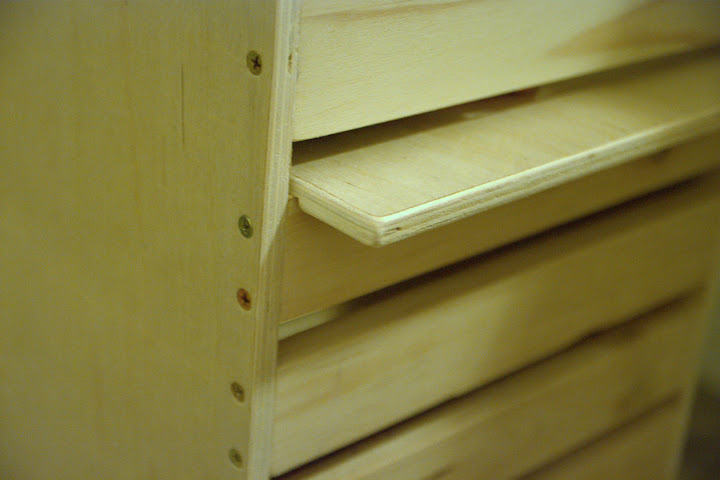 and the handles are cut out instead of attached to the outside: 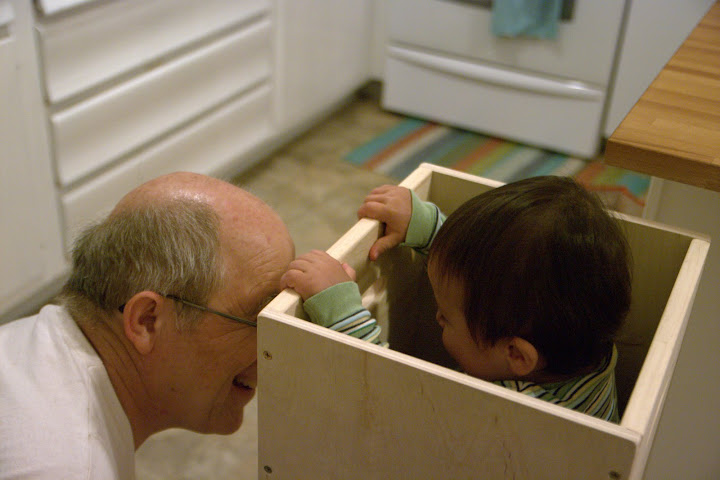 we put felt bumpers on the bottom so that it slides around the room easily if i need to move him (baby dude also enjoys pushing it around when he’s not inside it.Â  also, he loves tossing things into the box–refrigerator magnets, snacks, his bottle….).Â  thanks, dad!Â  i’m sure we’ll get lots of use out of this piece of furniture and it’s so much more meaningful since it was built by his grandpa!

update:Â  you can see the final painted version here!

10 Responses to celebrate the boy… with help from grandpa