i know you’ve all been waiting impatiently to see the clothes i sewed up during kids clothing week challenge, and i’m finally sitting down at a peaceful moment at the computer and i finally have photos of all (or at least most… i keep feeling like i’m forgetting at least one of the things i sewed….) of the pieces i made that week. i started off by making a “test” pair of the big butt baby pants.Â  i didn’t want to waste “good” fabric doing a test pair to see if the size was right, so i found this olive drab fabric (it’s a little stiff, like a lightweight canvas, almost) and decided it was a good neutral.Â  unfortunately, now that they’re all sewn up, they look a little army surplus to me, so i don’t know if i’ll be able to bring myself to put them on him. 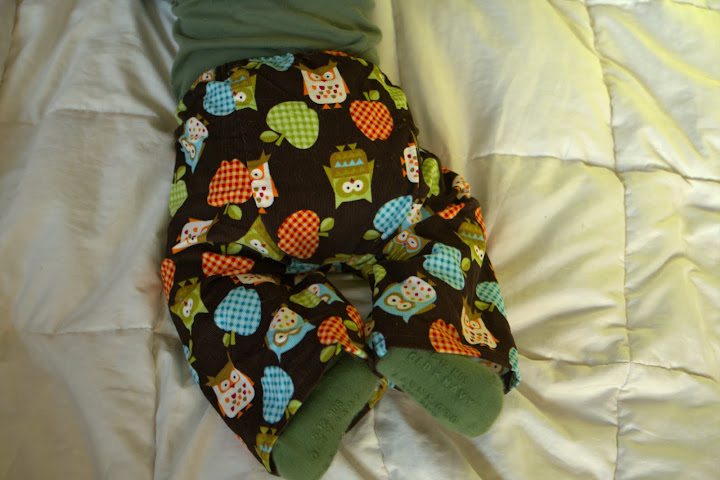 the second pair of big butt pants were made with this fine wale corduroy with super cute owls and apples.Â  i have to admit that these pants seem a bit…. busy to me, but he’s a baby and can get away with that for now, right?Â  still on the hunt for good winter pants fabric for this pattern. 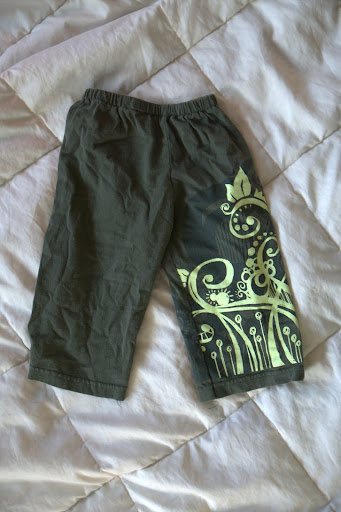 this is a simple stretchy pant made from a t-shirt (actually a whole foods “team member” tee from a few years ago that i found while thrifting) and i liked the design printed on the bottom edge of the shirt and think it makes some snazzy pants. 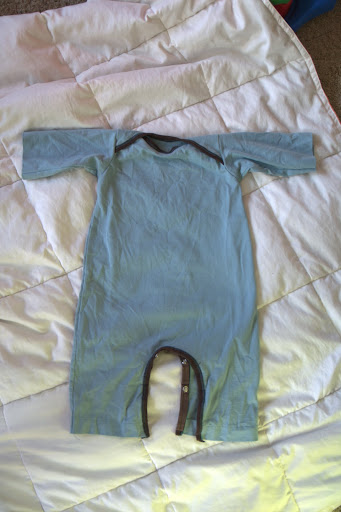 this is actually the piece that took the longest.Â  i created the pattern from scratch and actually sewed up a “rough draft” (sans seam binding and snaps) first that i didn’t bother to photograph.Â  there are still some issues with the pattern (and i put the snaps on slightly wrong) and he looks a bit like a jedi knight when he wears it, so i’m considering painting some sort of design on it at some point.Â  but then again, it bugs me that e.v.e.r.y. piece of kids clothing has to have some cutesy/funky/funny/sweet/sassy illustration emblazoned on it.Â  maybe i’ll try something a little more lotta jansdotter-y.Â  i’m just thrilled to pieces that it actually fits him!Â  it’s very empowering to make a piece of clothing that i “designed” myself! 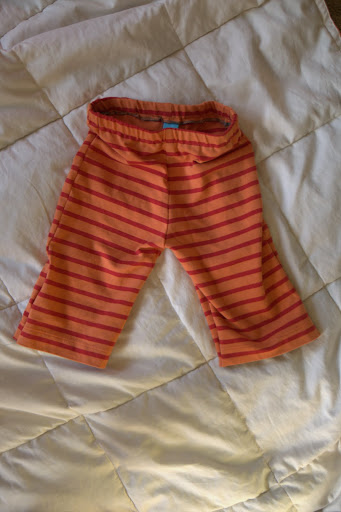 and this pair of pants was actually made quite a bit later than the official challenge week, but i can’t imagine that anyone wants to see even more posts about baby clothes, so i’m including it here.Â  plus, i just remembered that the other pair of pants that i didn’t get a picture of were black and white stripes using pretty much this same pattern, so …. use your imaginations.Â  i actually really like this pair of orange pants.Â  mostly because a) the fabric is nice and soft and thick and b) instead of just making a pair of pants because they’re cute, i actually consulted his wardrobe first and figured out what color pants would go well with more than one of his shirts and orange won out and i actually had this shirt already from the thrift store, so it seemed like fate.Â  and yes, it’s the same shirt that eventually also became sleeves in a recent baby shirt post.Â  hmm…. could he wear them together as an ensemble or would that be too matchy?

This entry was posted in baby stuff, crafty stuff. Bookmark the permalink.