before and after: the glider

okay, you caught me.  this is another baby-related post, but it’s also a furniture makeover and i am soooo excited about it, i just had to share it with you.  a little back story:  when we started to decorate the nursery, one of the pieces of furniture i knew i wanted to have in there was some sort of rocker/glider chair.  long story somewhat shorter–i spent waaaaaaaaaaaaaay too much time shopping for the perfect chair. (*see longer version below if you’re really interested)

i finally found a glider for sale in a city about an hour’s drive from here and they only wanted $75 for it.  it had most of the features i wanted (it reclined, it had a wide seat, it had padded arms) but it wasn’t particularly modern and it didn’t have an ottoman.  still, for that price (even with the gas to drive there to pick it up) it was a steal and we drove there that same night to pick it up.  here’s the before: 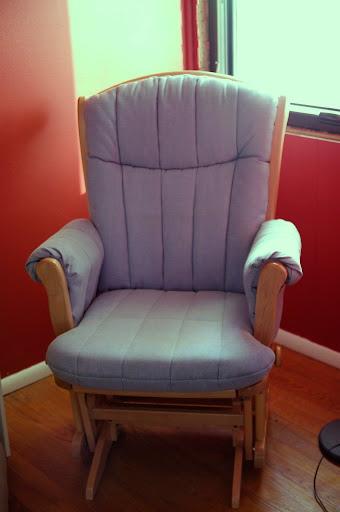 not terrible, but the upholstery was both faded and stained and the wood color didn’t go great with the other woods in the nursery, but it was very comfortable and had great gliding action.  we gave in and bought an ottoman new (on sale and with a coupon it still cost quite a bit more than we’d paid for the chair) and over the course of the last few months, i’ve worked in a few stages to sand/paint it (i did the whole chair with just one of the “sample” jars of paint in the martha stewart line from home depot and still have enough left over for touch-ups), make slipcover patterns (using a twin size flat sheet to make a trial slipcover, which also helped me to calculate how much fabric i needed) and sew new covers and now i’m so pleased with the results.  here is the “after”: 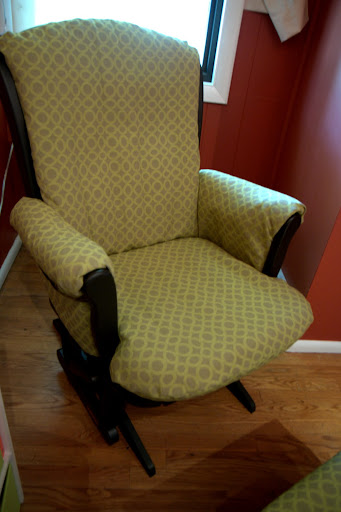 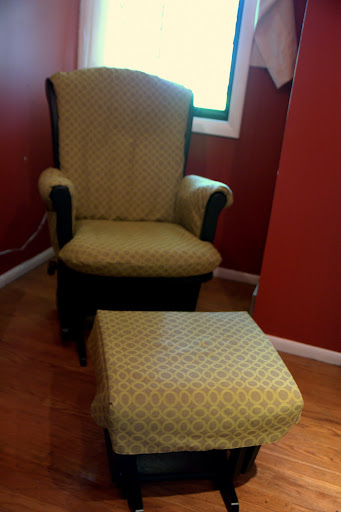 photographing things in this room with natural lighting is almost impossible, so the color isn’t quite right in these pictures.  this one is slightly more accurate although still a bit more yellow and not quite green enough: 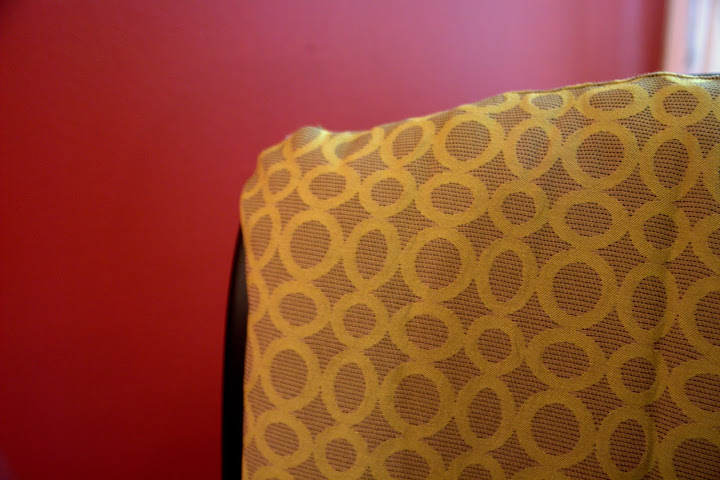 this is the perfect fabric. i wanted something modern and interesting, but not too bold (the room’s already pretty bright!) and this tone-on-tone pattern with round shapes that echo the other design elements in the room fits the bill.  it’s a lovely, heavy-weight but still soft-to-the-touch and at least somewhat stain-resistant and also washable upholstery fabric that i purchased from modern fabrics online.  i love this company’s concept (reclaim professional upholstery leftovers from furniture manufacturers that is headed to the landfill (!) and sell it to the public for less than it would cost new.  professional dumpster diving?  awesome.) and have been wanting an excuse to purchase fabric from them and this was the ideal opportunity.  they were very easy to deal with (i requested two fabric sample swatches which were sent very promptly and they answered my fabric care questions to the best of their knowledge and when i finally placed my order, they called to clarify one detail about yardage over the phone and the fabric arrived a few days later) and i will happily buy more from them the next time i decide to do a make-over for my furniture.  i was so excited when i got the fabric yesterday that i immediately dumped it into the washing machine for a pre-wash (i’d washed my sample already and learned that it doesn’t shrink much, but didn’t want any surprises) and had the chair covers sewn up before i went to bed and had the ottoman finished in an hour or so today (although i’d still like to attach it more firmly to the ottoman itself).  soooo much better than stained, faded (slightly scratchy) country blue cushions.

*first, i had to decide if i wanted a rocker or a glider (and yes, there’s a significant difference between the two.  i chose the glider because it’s less likely to develop a bumpy ride if used on a less than smooth surface and it won’t scootch all over the room while you’re rocking.), then i drooled for weeks over some beautiful modern options but couldn’t bring myself to pay the steep price tag attached to those chairs, and then i went to some furniture stores and actually sat and rocked in some chairs and fell in love with dutailier gliders.  they had the smoothest, longest glide of any chairs i sat in and they had wide seat options (important if you’ve met anyone in my family.  ahem.) and they reclined!  and then i made the mistake of sitting in one of their “comfort recliner” chairs and it was so amazingly comfortable that i almost invested in one, but realized that i really wanted to be able to rock with my feet up (not an option on those chairs) and was able to talk myself out of it.  barely.  so i spent months combing the craigslist listings in every city within a 3 hour drive of here (and sometimes farther if we were going on a road trip) to try to find a dutailier glider.  i wanted one that reclined and that had a wide seat and i was hoping for something with relatively modern styling.  these chairs are available on craigslist, but the good ones go quite quickly and usually still cost $300-$350, minimum.  so i looked.  and looked.  and looked.  i’d begun to resign myself to an ugly chair (we’ll just use it for a finite period of time anyway, right?) when i saw this inspiring makeover and i suddenly had hope that i could make this work.  (story continued above)

7 Responses to before and after: the glider