long-time readers might (maybe, possibly) remember the original “meets the neighbors” installment.  (hint:  click on the link in the last sentence to read that story if you’re interested.)  the most recent example of me pestering meeting my neighbors happened… well, actually probably several months ago at this point.  but it’s a good story and i want to tell it to you, so here it is, old news and all.

do you remember this photo? 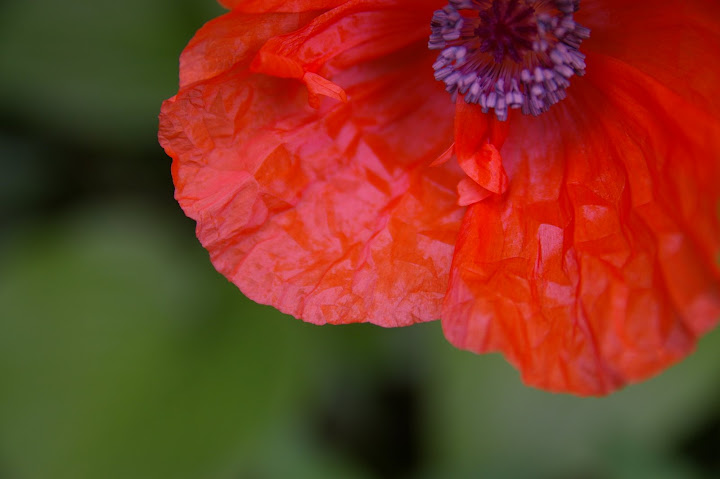 after i posted it here, one my aunts who reads my blogs (hi, aunt r!) asked if she could commission some poppy prints from me for her newly redecorated office.  i was honored by the request.  at first, we were both thinking probably 8×10’s framed nicely.  but then i got this great idea that i ran past her–how about gallery wraps?  this is a process where the photos are printed onto canvas — you can see examples if you click on the link in that last sentence.  she loved the idea and decided that 16″ squares (in a series of 3) would be about right.  then i started to worry.  the originals that she’d seen on my blog and that i’d e-mailed to her were taken in .jpg format and normally, that’s not a high enough resolution to print well for large formats like that.  and i couldn’t go take more pictures of my poppies in raw format because by that time, all of my poppies were gone.  what to do?

well…. i noticed that one of the houses down the street still had a fair number of poppies left in their yard.  i’d never met the owners of those poppies, but i hoped that maybe they’d let me crash around in their flower beds to take a few photos.  so, one early evening, i packed up my camera and put aside any lingering shyness about meeting total strangers and walked to the poppy house.  i rang the doorbell and a very friendly woman (maybe about the same age as me?  maybe a bit younger?) opened the door and said i was welcome to take as many pictures as i wanted.  she even pointed out that there was another patch of poppies in the backyard that i was welcome to photograph as well.  hooray!  i fought my way through clouds of mosquitoes and got a few shots that were okay.  this one was my favorite: 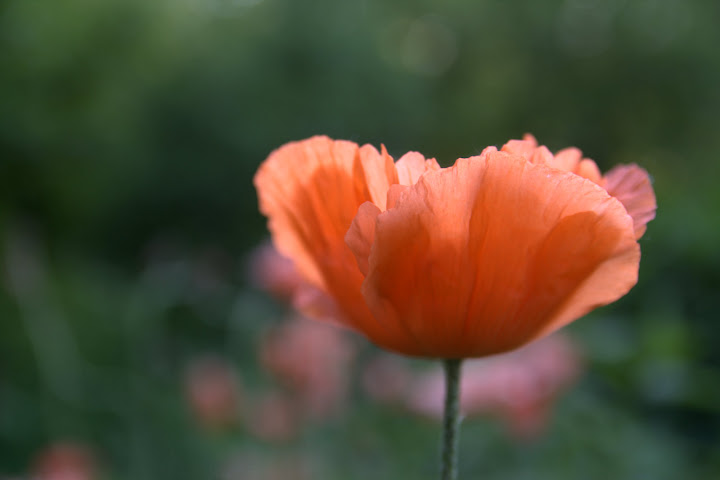 but no matter how much i tinkered with the image in photoshop (and with the “raw” format you can tinker a lot!  maybe too much, really….) it didn’t have the same richness of color or visual pow that the original photos had had.  i thought i’d try again in morning light to see if that helped.  i didn’t want to bother them by asking again and she had said that i could come over any time and i was only going to use the front yard, so i hoped i wouldn’t startle anyone.  but sure enough, as soon as i’d taken my lens cap off and was ready to shoot, the garage door opened and her husband came out on his bike.  he seemed a bit startled to see me (who wouldn’t startle to see a stranger in their yard?  sorry, dude!) but he recovered quickly and we had a nice, but brief conversation about the joys of bicycle commuting to work and how his bike was the exact same as my husband’s (except for the color) and then he left and i took a few more pictures. 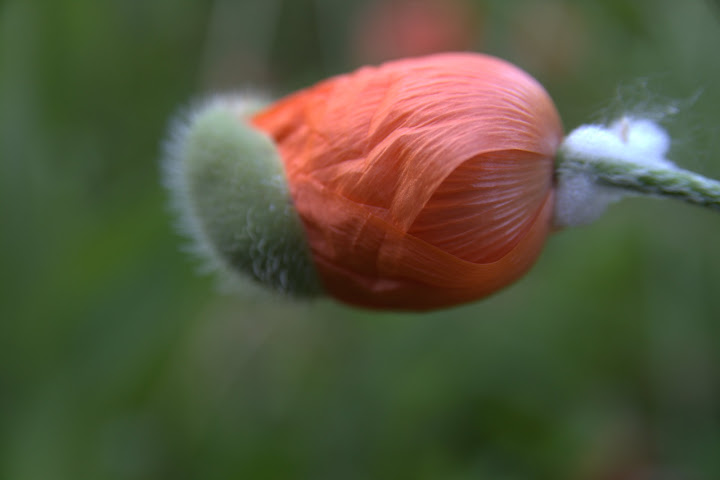 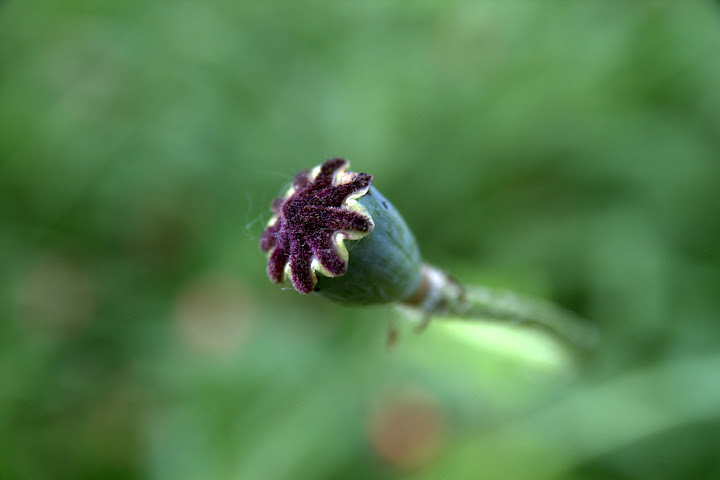 i also snapped this shot of a daisy on the side of the road right next to their house: 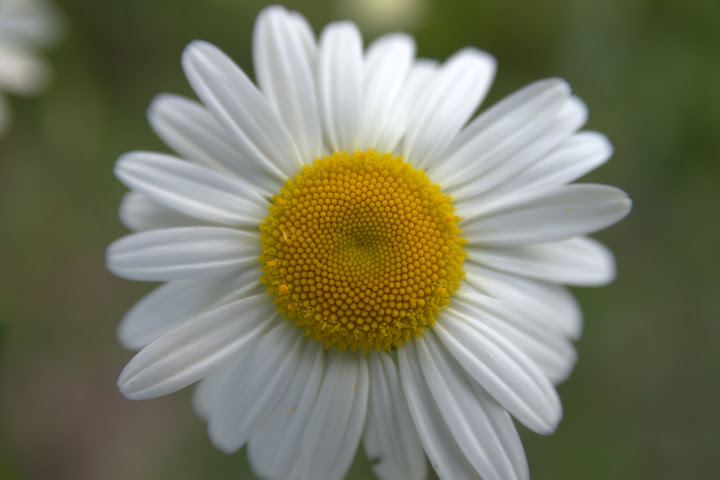 i love the designs that nature stitched into the head of this simple flower, but my aunt needed poppies, not daisies.  and these poppy pictures still had no sparkle.  no pizazz.  sigh.  i decided to just see if, by chance, the original .jpg images might possibly maybe be big enough to print.  i uploaded them to the site and was shocked to see that … they were big enough!  i was originally planning to order the same photo from two sites and compare quality, but the cheaper site told me that the image wasn’t high enough resolution, so i chose not to bother with them and just went to the site i trusted more.  (see that gallery wrap link above)  i uploaded my original poppy picture and just ordered one as a test and had it shipped to my house so i could see how it turned out before dropping more money on the other two prints.

i was so excited when it arrived!  here it is, still wrapped in protective plastic (that’s why it’s shiny): 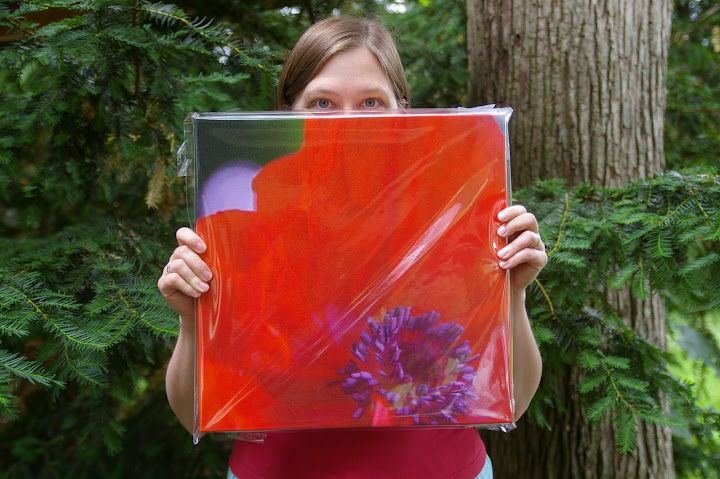 here’s another picture where you can see how the photo wraps around the sides: 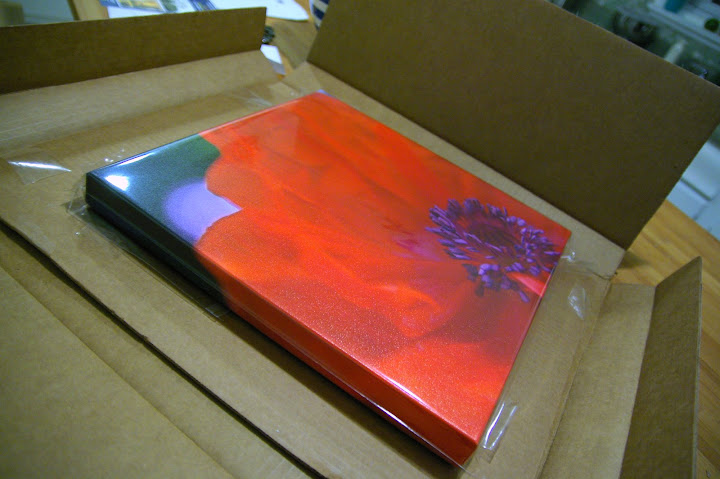 i love it!  it makes me feel like my photos are “real art”!  i wish that i could afford to do more of these for myself (i might need more walls…).  i think maybe i just need to find the right photograph–one that i looooooooove enough to live with for a long time.

in the meantime, i’ll just use them as desktop wallpaper.  in celebration of this new development in my life as an artist, i’ve added a few new pictures to the free desktop wallpaper gallery.  enjoy!

p.s. a big, big thank you to my new neighbor friends for allowing me to crash through your yard, snapping pictures and slapping mosquitoes.  if i can ever return the favor (or another favor.  i can’t imaging you’d have any interest in photographing my paltry poppies), please don’t hesitate to ask!

p.p.s.  if i ever get a good photo of the series of three in my aunt’s office, i’ll be sure to post it here!

This entry was posted in photography, stuff that makes me smile. Bookmark the permalink.